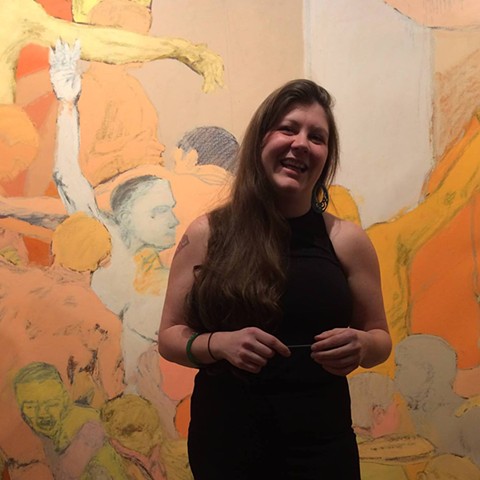 Lauren Boilini was born and raised in Bloomington, Indiana. She received her B.F.A. in Painting and Art History at the Kansas City Art Institute and her M.F.A. at the Maryland Institute College of Art. As a painter she also works in installation and public art, completing exhibitions and projects up and down both coasts. Traveling to and participating in artist residencies has been an important part of her practice. She has served as an artist-in-residence at Can Serrat in Spain, Jentel Arts in Wyoming, Soaring Gardens in Pennsylvania, the Studios of Key West, the Creative Alliance and School 33 Art Center in Baltimore, and as a Consortium Resident at the Studio Art Centers International (SACI) in Florence. She was invited as an artist-in-residence at the Burren College of Art in Ireland and received a full fellowship to the Vermont Studio Center in 2012. She has completed public art projects for the Maryland Department of Public Health and the Greenville-Spartanburg Airport. In 2016 she was awarded a grant to publish a book of drawings and spent the summer of 2019 as an artist-in-residence at MASS MoCA working on the sequel, which she completed for a solo exhibition at Furman University in South Carolina in 2020.

In addition, she currently teaches at the Evergreen State College, Olympic College and Cornish College of the Arts. Collaborations with a number of different artists in her close-knit community have been vital to the development of her work and she looks forward to future opportunities. Lauren is also a marathon open water swimmer and with her immediate family close by, she loves to call Seattle home. In my current body of work I look at the idea of excess, when images of excess become meaningless and fall into the realm of pattern. This idea of gluttony is reflected in our current culture. We are a hedonistic society, always looking for more until the more we are looking for loses its meaning.

My studio practice has consistently been painting, often extending into the realm of installation. Though I traditionally work on a large-scale, in 2016 I was awarded a grant to create a small book of drawings loosely based around the structure of a graphic novel, to which I recently finished the sequel. I built the book sequentially, telling the story behind paintings I have been working on for the past ten years. It consists of small drawings that investigate my thoughts on sport and war, and their shared violence. Image-based, the story takes place on a fictional island in which only male members of different species have survived, and explores the destruction that follows. In this second book, the human men have died off, and their animal counterparts have been left to take over the island and fight for power. The development of this narrative has guided the content of new work, moving me back and forth between large and small, and leading me into a third in the series of artist books.